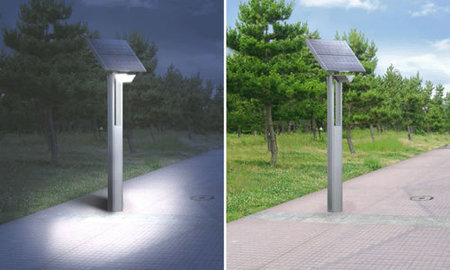 Sharp will introduce two models of solar-powered LED street lights that combine Sharp’s proprietary solar (photovoltaic) modules and high-intensity, long-life white LEDs for the Japanese market on August 21, 2008. The Sharp LN-LW3A1 Solar-Powered LED Street Light delivers brightness at the industry’s highest level rivaling the light output from a regular 32-W fluorescent security light (which uses six compact fluorescent tubes) that is becoming the dominant product for this application. The Sharp LN-LS2A1 provides light output comparable to the 20-W class of security lights and is ideal for spot lighting in areas such as public parks. These units also feature a Seismic Motion Sensor that detects the occurrence of a major earthquake measuring 5 or greater on the Japanese seismic scale and turns on the unit at full brightness during nighttime hours for two days. This allows these units to serve as emergency lights in case of a power interruption in the surrounding area.

The operation of the LN-LW3A1 eliminates approximately 48 kg of CO2 emissions per year compared to using lighting units powered by conventional utility sources. The integrated LEDs use no mercury, an environmentally hazardous substance, and also emit no ultraviolet light. Further, because they have a long service life requiring replacement only once every 10 years, almost no time and effort is involved in maintenance.