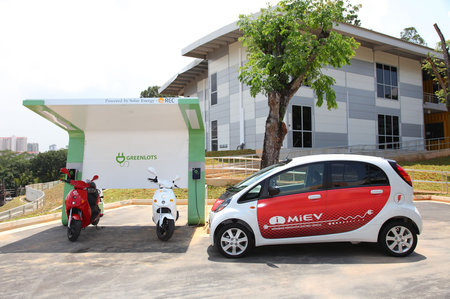 Zeco Systems has launched Singapore’s first electric vehicle charging station that harnesses energy straight from the sun. This solar powered station is located at the Singapore Polytechnic, and joins existing, conventional Greenlots set up by the company, located at IKEA Tampines, IKEA Alexandra Road as well as at the INSEAD campus. The Solar Greenlots generates an average of 3.15kWh per day and is able to charge two to four electric scooters per day, and charging time equals the time offered by a normal, main socket. It can also accommodate other electric vehicles as well.

Since March, 2007, the Singapore government has pledged over 350 million Singapore dollars ($234.8 million) in research, development and technology of the clean energy sector.