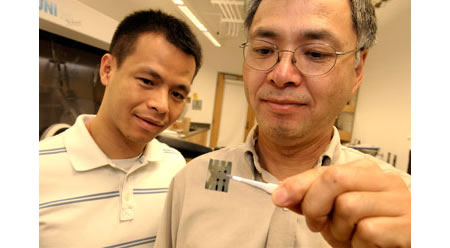 Solarmer Energy Inc. is developing plastic solar cells for portable electronic devices that will incorporate technology invented at the University of Chicago. The University licensed the patent rights to the technology to Solarmer last September. The prototype, a cell measuring eight square inches (50 square centimeters), is expected to achieve 8 percent efficiency and to have a lifetime of at least three years. The invention, a new semiconducting material called PTB1, converts sunlight into electricity. Inventors Luping Yu, Professor in Chemistry, and Yongye Liang, a Ph.D. student, both at the University of Chicago.

An advantage of the Chicago technology is its simplicity. Several laboratories around the country have invented other polymers that have achieved efficiencies similar to those of Yu’s polymers, but these require far more extensive engineering work to become a viable commercial product. Dr.Vishal Shrotriya, Director of technology development will be presenting plastic solar cells at the 5th annual Smart Fabric Conference to be help in Rome from 10-12th March, 2009.