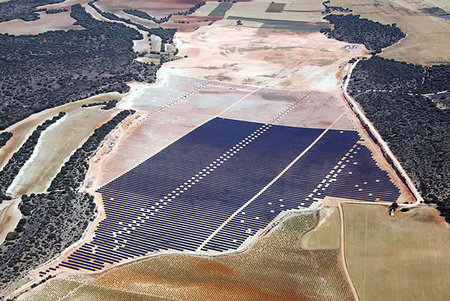 Kyocera is fitting out another major solar power plant with photovoltaic modules for the Spanish renewable energy company Avanzalia. When finished, the project will be one of the largest solar power generating facilities world-wide. In August 2008, the plant in the Castile-La Mancha region of the Spanish province of Cuenca will be capable of generating 18 MW – enough electricity to supply 9,200 households. By this time, 89,320 Kyocera PV modules will have been installed. Some 3,300 tonnes of steel were used to build the supporting frame.The total site will have a surface area of 80 hectares and cover a space larger than 100 football fields.

The province of Cuenca also has features optimal for solar energy and from which the new plant will profit. Located 800 metres above sea level, it is a place where temperatures remain moderate. In addition, sunlight in these regions is reflected by the typically light-coloured surface of the earth to yield up to 1,891 kWh/m2 of available solar radiation annually. In September 2007, Kyocera and Avanzalia inaugurated their first co-operatively produced plant at Salamanca, Spain. That facility can generate a maximum of 13.8 MW of power.