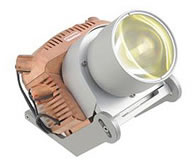 In France, on Tuesday, June 4th, a lighting ceremony was held in the musée du Louvre’s Napoleon Hall to celebrate the completion of the Toshiba LED lighting renovation for the displays of the Mona Lisa and Red Room. A unique, highly innovative lamp was installed in front of Mona Lisa and concealed in the shelf next to the painting. This lamp uses 34 LEDs and allows for the compensation of colour shift due to the protective glazing and ambient lighting. The lamp includes various optical systems to frame the painting and to maintain very high lighting uniformity across the masterpiece. An innovative control system, that allows the musée du Louvre to adjust the spectrum of the lamp as precisely as possible, was developed with the highest possible fidelity to colours.

The lighting renovation of the Mona Lisa and displays in the Red Room is the first time Toshiba LEDs have been used for interior lighting in the museum, and has allowed for the installation of a new generation of lighting products. The lamps and lighting fixtures developed by Toshiba have improved colour rendering of the paintings, total suppressed UV and IR radiation, and reduced electricity consumption for the Red Room and the Mona Lisa.


READ  Toshiba Announces New 18TB MN09 Series NAS Hard Disk Drives
The musée du Louvre and Toshiba have maintained a partnership agreement since June 2010. Toshiba has for far renovated lighting of the Pyramid, the Pyramidions and the Pavillon Colbert (December 2011) and the Cour Napoleon (May 2012) – a testimony of the Louvre’s investment in the environment. The renovations have significantly cut power consumption, and a 73% cut in power consumed by exterior lighting. A dedicated website has been created showcasing Toshiba’s involvement in the musée du Louvre’s lighting renovation project. The site explains each of the phases of this project.
READ  Toshiba announces new 32GB FlashAir SDHC Memory Card with Internet Pass thru Mode feature
Categories
LED
Tagged
ledToshiba