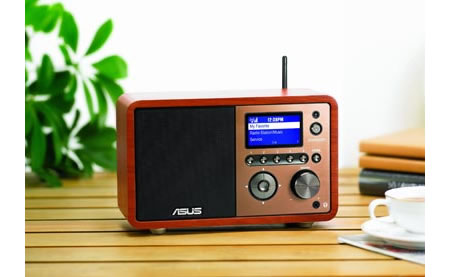 Asus Internet Radio (AIR) provides users with the capability to tune in and listen to worldwide broadcasts without the need for a PC. With the support of more than 10,000 broadcast stations worldwide, users can now listen to whatever catches their fancy. When they connect the ASUS Internet Radio (AIR) via a wireless or LAN (DHCP) connection, the whole world opens up as they can choose music from any genre from any corner of the globe. Additionally, users can also tune in to their domestic broadcasts to keep in touch with what’s happening at home when they are abroad. When laptops are used to listen to music, up to 300W of energy must be used and if the notebook is used for listening to Internet radio, 65W is needed. However, with the AIR, it only takes a mere 8W of electricity. Users can also compile up to 250 of their very own favorite list of stations with ease. The built-in buffer function radically improves the quality of songs as users of the AIR will be able to choose between 3 options: 2 second, 4 second and 8 second buffers – allowing them smooth radio listening even with lapses in the Internet connection. A great feature of the Asus AIR is the fact that it can also play MP3s from the user’s MP3 players. By simply connecting the MP3 player to the AIR, users will be able to listen to their MP3s through the AIR speakers. Another useful feature that the AIR provides is Synchronized Time. Through the Internet, users can be sure that they will always have the correct local time no matter where they are in the world.

The Asus AIR has a built-in sleep timer that allows users select a preset amount of time for the alarm snooze before they sleep. Users can set up six options: 15, 30, 60, 90, 120 minutes or switched off. The AIR has 3 backlight options to let users adjust the brightness of the backlight, or even it off to suit the user’s needs. The Asus AIR utilizes a wooden speaker that resonates enhanced sound quality for better musical enjoyment. It also allows users to add their own additional amplifier or speakers for even clearer, highest quality radio sounds. Users can also use their own headphone to listen to Internet radio.