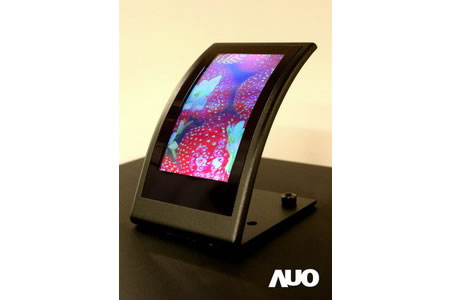 AU Optronics today announced the world’s first Convex Curved Display after showcasing: the world’s first Concave Curved Display at SID 2008 in May. The curved radius is 100mm with TFT-LCD process on glass substrate. Therefore it requires a special thinning technology. The specially designed curved backlight unit maintains uniformity in brightness and contrast on the convex curved surface. Unlike the existing e-paper on a flexible substrate, AUO’s new convex curved display technology can bring TFT-LCD technology up to the greater level in terms of color performance and image quality.

AUO’s new Convex Curved Display will be applied to some curved display applications in the future, such as watches and dashboards etc. AUO will showcase both convex and concave curved display at Display Taiwan 2008 held in TWTC Hall 1 in Taipei from June 11 to 13, 2008.