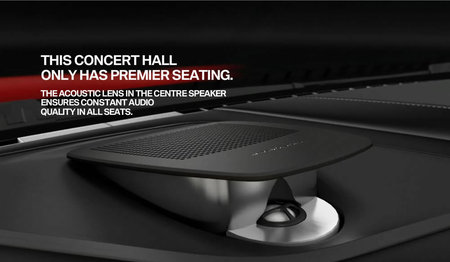 The acoustic lens cover reveals an additional mid-range loudspeaker that delivers perfectly balanced sound throughout the cabin.For the BMW 6 Series Convertible, an additional sensor automatically instructs the Digital Signal Processor (DSP) of the sound system to adapt the sound performance to suit the altered ambient cabin conditions, whenever the soft top is raised or lowered. The combination of light and sound is most impressively demonstrated when the system is activated. A loudspeaker cover in the center of the dashboard silently lifts to reveal the large acoustic lens while the embedded LED lights simultaneously turn on.