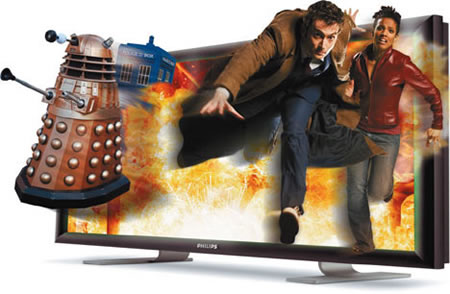 Coming 3D TV- the next generation of must-have sets

First you needed those multi-coloured specs to watch TV in 3D, but now scientists are promising the real thing – and without the zany glasses. Manufacturers are already developing the three-dimensional televisions and are convinced they will be the next generation of must-have sets. The new TV screens produce 2D plus depth. And while that is not pure 3D, it gives such a strong impression of three dimensions that viewers will believe they can look around images. This illusion is created by a ribbed lens on the front of the screen that sends different images to each eye, giving the impression of depth. To ensure the 3D image remains when a TV viewer moves, the screen sends out nine images of the same scene. The viewer needs to pick up only two of the nine – one per eye – to give the impression of 3D depth. Hans Driessen, of Philips 3D Solutions, said: “People will see 3D in public places and once they experience it they will want it in their homes. They won’t want 2D.”

The TVs, made possible because of breakthroughs with high-definition technology, could be in High Streets within five years. They would cost around £2,500 ($5,600) at today’s prices. However, a full-scale launch would depend on the availability of programmes in 3D format.
Source:-