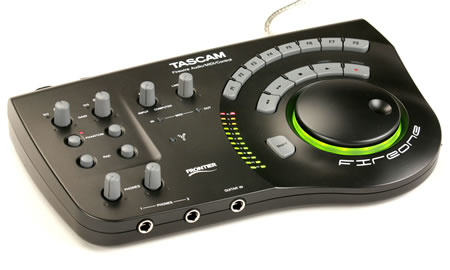 The innovative new FireOne from TASCAM and Frontier Design Group is a FireWire audio interface that combines stereo audio I/O with a great-looking and feeling control interface. The FireOne includes a copy of Live Lite 6 TASCAM Edition, the music creation, and production and performance software from Ableton. Live’s drag and drop interface makes it easy to seamlessly move from basic song ideas, to studio production, to the stage. The FireOne features a pair of mic inputs with phantom power, pad and line switches. A guitar input switch for recording direct and MIDI input and output are also provided. It will be the first FireWire interface in its class to record and play at up to 192 kHz/24-bit resolution (with a future free software update).

In addition to its weighted & backlit jog wheel, the FireOne has transport keys and eight shortcut keys to control functions in audio applications like Logic Pro, SONAR, Cubase, Nuendo, Digital Performer, and Live. .