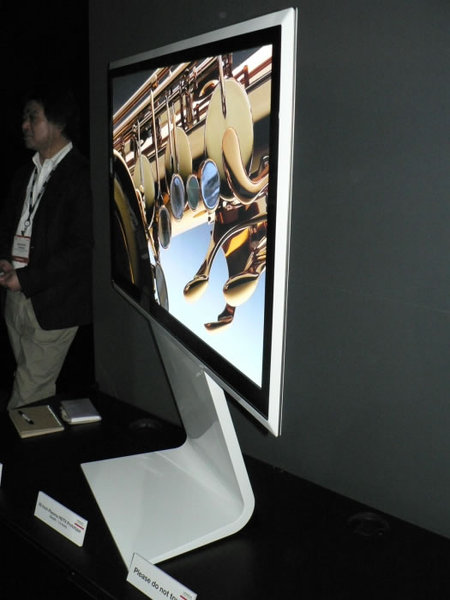 Hitachi unveiled a prototype 50-inch PDP TV featuring a “thickness of 1.5 inches” (approx. 35mm) at the 2008 International CES. Hitachi plans to commercialize an ultrathin 50-inch PDP like this prototype in 2009. The key factor that enabled the thickness reduction was the enhanced luminance efficiency of the panel, Hitachi said. The new Hitachi PDP TV is reportedly able to ensure the luminance at a certain level with a lower input power, thereby making it easier to overcome a technical hurdle relating to the heat dissipation. In addition, the company employed a new technology for a heat dissipation mechanism, which is different from the technology used in the 35mm thick LCD TV released at the end of 2007. In Hitachi’s latest prototype PDP TV, part of the power circuit is integrated with the back side of the display, whereas all the circuit boards are provided externally in Pioneer Corp’s prototype 9mm thick 50-inch PDP TV. Hitachi’s TV does not incorporate a tuner because it is a prototype.

The establishment of heat dissipation technology and the weight reduction are issues in the commercialization, the company said. The target weight of the 50-inch model is 20kg. Although the latest prototype uses a 1280 x 1080i ALIS panel, a similar thickness reduction technique can be applied to a 1920 x 1080p full-HD panel, the company said. Another new panel, which is different from the one used in the latest prototype, is likely to be used in the 2009 commercial version. Hitachi expects that the luminance efficiency will be further improved and the power consumption will be reduced by then.