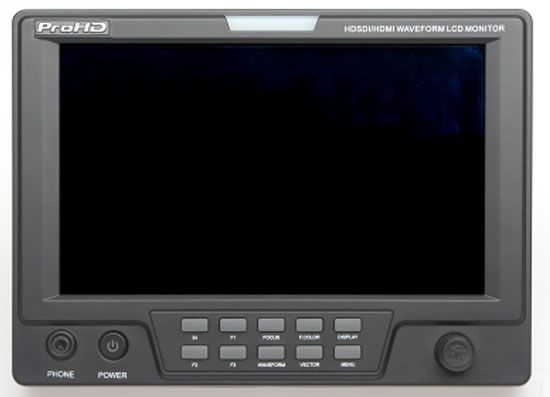 JVC Professional today announced the DT-X71 Series of portable ProHD LCD monitors. Ideal for field and studio applications, the new seven-inch AC/DC monitors offer 1024×600 resolution with a 160-degree viewing angle – and can display 480i, 480p, 720p, 1080i, and 1080p video signals at a variety of frame rates. There are three models in the DT-X71 Series, with scaled I/O options and features for specific needs. The basic DT-X71C model offers one HDMI and one composite video input, while the DT-X71H adds two HD/SD-SDI inputs and an HD/SD-SDI loop through output. The DT-X71F includes an additional HD/SD-SDI loop through output and one HDMI converted to SDI output. All three models include stereo audio input.

Each monitor is powered via a four-pin XLR 12V DC connector with included AC adapter or an optional snap-on JVC BN-VF823USP 7.2V battery. DT-X71 Series monitors also ship with a cold shoe mounting adaptor and hood. The DT-X71C has a suggested list price of $595, the DT-X71H is priced at $1,095, and the DT-X71F is priced at $1,695. All models are now available.