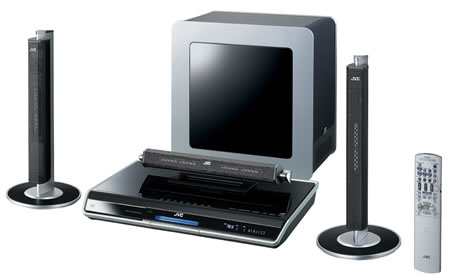 The new JVC Sophisti DD-3 system offers an easy way to play computer-based music and video files through a home entertainment set up. At the heart of the new JVC Sophisti DD-3 system is a network media player that serves as the nerve center of the home entertainment set up. The system includes a DVD player, an AM/FM tuner and inputs for connecting other components and an Ethernet connection that allows it to connect to a personal computer, allowing retrieval of music files, movies, digital images and other digital files stored on the computer. JVC’s Sophisti system can connect directly to a single computer, or to multiple computers through a wired or wireless router, providing access to files stored on any connected computer. Once set up, audio is routed through the system’s speakers while video and still images are displayed on a connected television. In addition to playback of digital files stored on a computer, the JVC DD-3 also offers USB Host, allowing a wide range of digital devices to be connected directly to the system, including flash audio players, USB drives, digital cameras and card readers.

The Sophisti’s main unit also includes built-in decoding of Dolby Digital, DTS and Dolby Pro Logic II soundtracks. An HDMI interface ensures that the best possible signal is sent to the connected television. Operation of all functions is convenient and easy using the Sophisti remote control and user-friendly on-screen interface. The JVC Sophisti DD-3’s left and right speakers are tabletop designs – sleek black and silver cylinders that stand barely 15 inches tall. The center channel speaker with similar design is configured horizontally rather than vertically like the main speakers. The JVC Sophisti DD-3 is available for about $1,000.00.