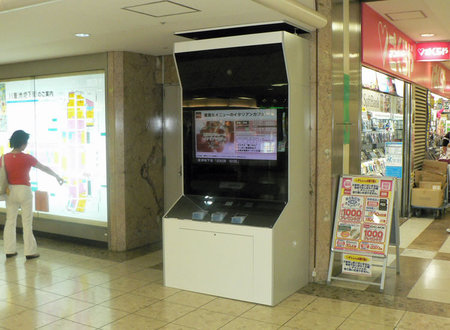 Recruit Co Ltd (a human resources and classifieds company in Japan) is delivering advertising videos for the cafes and restaurants in the underground mall of Tokyo Station by using the Scent-emitting LCD Display System. The system, developed by NTT Communications Corp (a subsidiary of Nippon Telegraph and Telephone (NTT) Corporation) emits appetizing aromas along with the advertising videos shown on a 42-inch LCD display. In front of the LCD display, there are coupon books that can be used at the restaurants advertised in the videos. So, the purpose of the system is to attract people by videos and scents, and to make them grab a copy of the coupon books. This experiment is being conducted to verify the system’s effect of drawing customers.

Also, in this experiment, Recruit utilizes the “Commercializer,” Recruit’s service of making advertising videos for free, to reduce the time and cost required to create the video contents. The Commercializer enables to easily make advertising videos just by using pictures and texts on the templates available on the company’s Web site. Recruit began this experiment July 18, 2008, and plans to continue it until Aug 1.