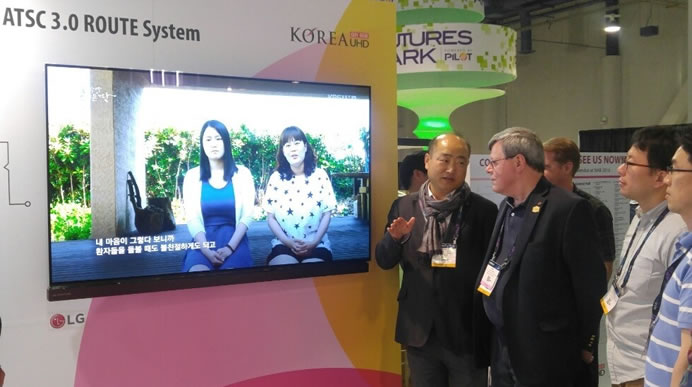 LG today demonstrated a unique new wireless network antenna designed to receive and process ATSC 3.0 next-generation television broadcast signals and redistribute them via WiFi throughout the home to connected devices such as smart TVs, tablets, laptop computers and smartphones. The ATSC 3.0 wireless network antenna is based on an LG-developed uni-directional antenna array with unique electronic steering logic designed to optimize indoor reception. LG is integrating a chip-based ATSC 3.0 tuner-demodulator with the antenna, which can be placed virtually anywhere in the home – in the attic, in a window, in a closet – wherever reception is best.

The steerable network antenna is coupled with a network interface to communicate with the in-home WiFi router to allow connected devices to blend ATSC 3.0 signals and services with over-the-top Internet-delivered content.The LG Wireless Network Antenna also is designed to receive current “ATSC 1.0” DTV transmissions and similarly route them to an array of consumer devices. Expected to redefine TV broadcasting for decades to come, the next-generation ATSC 3.0 broadcast television system is being designed to deliver 4K UHD services, robust reception on mobile devices and improved spectrum efficiency. LG and Zenith are key contributors to ATSC standards activities, including development of core technologies in the majority of the ATSC 3.0 Physical Layer transmission system.