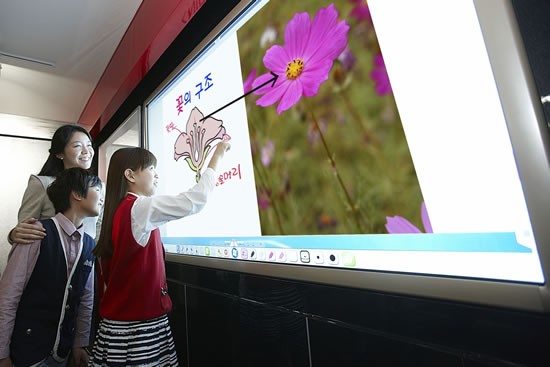 LG Display announced today that it has begun mass production of the world’s first 84-inch Ultra Definition (UD) LCD display for interactive whiteboards. At 1.9m by 1.1m, LG Display’s new 84-inch UD panel for interactive whiteboards measures as the largest LCD product of its kind, ideal for installation in classrooms as it is similar in size to conventional whiteboards currently used in schools. In addition, the display features a maximum brightness of 350 nit, 3.5 times brighter than existing projector-type interactive whiteboards; and UD resolution of 3840 x 2160 (about 8.3 million pixels), 8 times the image quality of current HD projectors. With superior brightness and clarity, the new whiteboard display solves weaknesses inherent with current projector-type whiteboards. Users no longer have to turn off the lights or close multiple window blinds during the daytime to play educational content.

LG Display’s new display is able to integrate touch functionality allowing users to annotate directly on the screen, without the need for a separate touch-enabled whiteboard screen as required by projector-type. The display can also be equipped, upon request, with LG Display’s industry-acclaimed Film Patterned Retarder (FPR) 3D technology featuring wide viewing angles and inexpensive glasses – key for a class full of students. The new whiteboard is expected to launch in Korea and China at the end of 2012, followed by North America and Europe in the first half of next year.