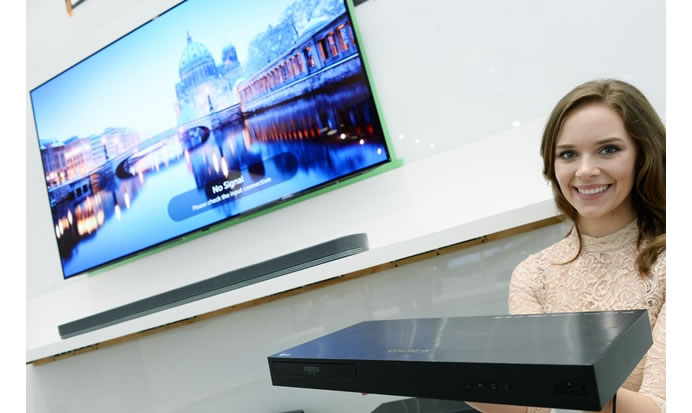 LG and Dolby Laboratories today announced the LG UP970 Ultra HD Blu-ray player, LG’s first 4K Blu-ray player which will support Dolby Vision high-dynamic-range (HDR) imaging. Leveraging the HDR technology that powers Dolby’s most advanced cinemas around the world, Dolby Vision transforms the TV experience in the home by delivering greater brightness and contrast, as well as a fuller palette of rich colors. The UP970 also offers enhanced dual format HDR compatibility with support for the generic HDR format (HDR10), giving consumers the peace of mind that they will have access to the most HDR content possible.

The LG UP970 has two HDMI ports, an HDMI 2.0a port for Ultra HD video output and an HDMI 1.4 for audio output that can connect with hi-fi devices, such as AVRs and sound bars, to enhance sound output quality. With Ethernet and Wi-Fi connections, users can easily stream their favorite online content via Netflix and YouTube, while the USB port allows for playback of movies, pictures and music. Dolby Vision capability for the UP970 will be available through a software update scheduled for later this year.