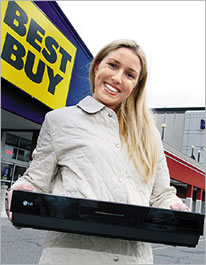 LG Electronics announced that it began selling its next-generation dual-format DVD player in the United States on Saturday. The Super Multi-Blue Player -BH-100 was unveiled at the Consumer Electronics Show in Las Vegas last month, where it was awarded the Best in Show prize. The LG Super Multi-Blue Player -BH-100 is the first player to play both Blu-ray discs and HD-DVDs, went on sale at 500 Best Buy and Circuit City stores, America’s largest electronics chains.

The product costs US$1,199. Following the U.S. debut, LG plans to introduce the model to consumers around the world.