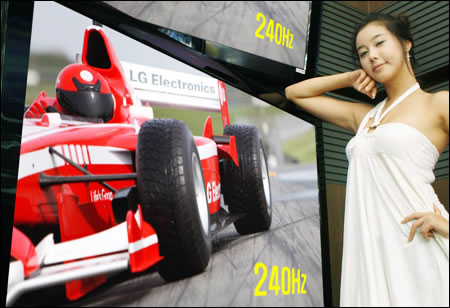 LG launched its newest high-definition television (HDTV) to South Korean consumers on Tuesday, which includes features designed to improve the quality of fast-moving scenes. The liquid crystal display (LCD) television, the LH50, available in 42-inch and 47-inch versions boasts a 240 hertz refresh rate, which is about four times faster than the 60Hz models that are conventional now, an improvement on the chief weakness of LCD screens, which tend to blur when displaying motion. The LG LH50 allows users to watch movies and video clips download from the Internet by connecting their storage devices to the television’s USB input.

The LG LCD HDTV incorporates LG’s Color Decanting technology for crisp images and color accuracy, and its EYEQ Green technology, which use small sensors to detect ambient light and adjust the brightness of the display accordingly. The 42-inch models will be sold for 1.7 million won (about $1,370) and the 47-inch models for 2.5 million won.