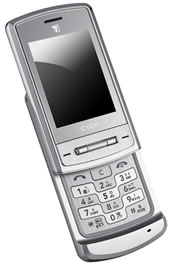 LG Shine Phone Set to Hit EU and US Markets

LG Electronics plans to unveil its Shine phone to consumers in Europe and the United States at the world’s largest International Consumer Electronics Show to be held in Las Vegas on Jan. 8. LG will set up a booth made entirely of stainless steel to promote the new handset, which is made of the same material. Shine phone is the successor of LG’s popular Chocolate phone. The company began to sell the CDMA version in South Korea last month. The Shine phone got its name from its stainless steel casing. It features a mirror-like front screen, a 2-megapixel camera, Bluetooth wireless connectivity and an MP3 player. It also has a scroll wheel on the front, which is designed to make navigating easier. The GSM version will be first released Europe in the first quarter of the year, and then in Asia and in the United States later.

LG will also unveil at the expo_ the Prada phone which LG has jointly explored and developed the new phone with the Italian luxury fashion brand. The initial launch of the Prada phone is planned for early 2007, with distribution starting in Europe, followed by countries in Asia, including Hong Kong, Taiwan and Singapore. The Korean version of the phone is scheduled to hit markets in the second quarter of 2007.