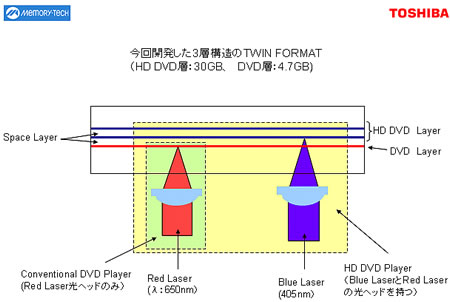 In collaboration with Toshiba Corp., Memory-Tech Corp. has developed a ROM disc able to record both HD DVD and DVD contents on a side of the disc. The disc consists of three layers formed with a single DVD layer (4.7 GB) and dual HD DVD layers (30 GB) in order of distance from the optical head. Contents recorded on the DVD layer can be played using standard DVD players on the market. The two companies intend to propose this three-layer media specification to the DVD Forum in late September to October 2006. If the DVD Forum smoothly formulates the specification, the companies can release commercial applications in early 2007. By doubling the HD DVD layer and coating a disc with three layers, the companies realized 30 GB memory capacity, which is equivalent to a standard HD DVD package disc’s.