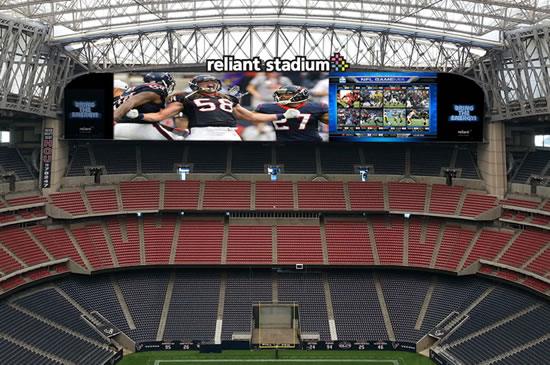 Mitsubishi Electric announced today that it has completed installation of two 3,385-inch Diamond Vision displays, both 1,352 ㎡ (16.0 meters high x 84.5 meters wide), at Reliant Stadium in Houston Texas, home of the Houston Texans American football team and the planned site of the 51st Super Bowl in February 2017. The displays, the largest in any sports facilities in North America, will be fully operative for the Texans’ preseason home opener on August 17.

The Harris County Sports & Convention Corporation (HCSCC) ordered the two Diamond Vision displays, which are approximately 5.7 times larger than the previous display. They are installed behind the north and south end zones, respectively. Reliant Stadium was built in 2002 and seats more than 70,000.