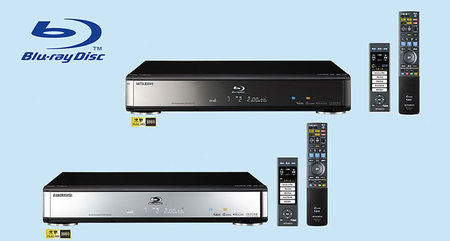 Mitsubishi has announced two models from its new “REAL Blu-ray” Blu-ray Disc recorder series. The two models are the “DVR-BZ200” with a 500-Gbyte HDD and the “DVR-BZ100” with a 250-Gbyte HDD. These are Mitsubishi’s first Blu-ray recorders. Both models feature two tuners for each of terrestrial digital, BS digital and 110-degree CS digital broadcasts, so they can simultaneously record two digital broadcast programs in high definition (HD) mode. A terrestrial analog tuner is housed as well. For easy playback, recording and other operations, Mitsubishi incorporated its new “REALINK” capability compatible with its “REAL” LCD TVs in the recorders.

In addition to a standard remote controller, the Blu-ray recorders come up with another remote controller equipped with a touch screen LCD panel. To realize even easier operations, this controller displays necessary buttons on the LCD panel in accordance with the option chosen by the user. Mitsubishi REAL Blu-ray” Blu-ray Disc recorders DVR-BZ200 and DVR-BZ100 will be available in Japan from May24, 2008