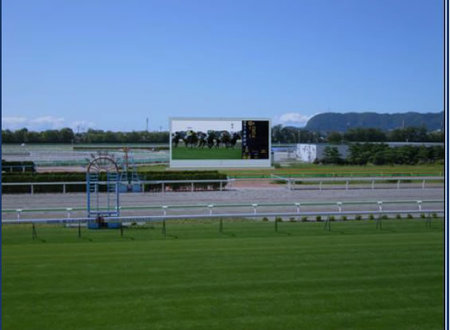 Mitsubishi has received a second order for a large Diamond Vision display system for the Hakodate Racecourse, Japan. The newly ordered display will be a 17 m x 7 m high-definition main screen featuring high-luminance light-emitting diodes (LEDs) aligned in a 10 mm dot pitch. The split-screen display can simultaneously present two separate screens of content, such as live footage of a race on one screen and race odds and other data on the other.

The large display will begin operating as part of a new main stand in June 2010, when Hakodate Racecourse is scheduled to complete a full-scale reconstruction. It will replace the facility’s current CRT main display,also built and installed by Mitsubishi Electric Corporation in 1996.