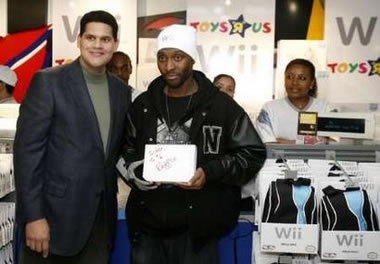 More than a thousand fans lined up in Times Square for the Sunday launch of Nintendo’s entry into the holiday season’s field of competing video game consoles, the cheap but innovative Wii. Despite the throngs, the midnight launch event went smoothly. The Wii itself is a daring design: It eschews the high-definition graphics that are the main selling points of the PlayStation 3 and Microsoft Corp.’s Xbox 360, which came out a year ago. Instead, Nintendo hopes to attract a new generation of fans by changing the way games are played. The console comes with a motion-sensitive controller that acts as a tennis racket, baseball bat, steering wheel, gun or sword depending on the game.The first buyer, Isaiah Triforce Johnson, had been waiting in line outside the store for more than a week. He wore a Nintendo Power Glove, a wearable controller that came out in 1989, while shaking hands with Nintendo of America president Reggie Fils-Aime after buying the first Wii.

In a somewhat unusual move for a Japanese company, the Wii was scheduled to go on sale in Japan two weeks after the U.S. launch, the opposite of Sony’s launch order. Nintendo said it made the decision to get in on U.S. holiday shopping, which starts earlier than shopping in Japan. The Wii costs $250 and includes one game. The two PlayStation 3 models cost $500 and $600, with no included game. The two Xbox 360 models cost $300 and $400, with no game.
Via Yahoo News