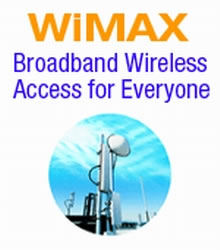 Nokia expects to start selling cell phones using the new WiMAX Internet technology in 2008, the world’s top handset maker said on Wednesday while unveiling network technology for WiMAX. For now, a computer can connect to a WiMAX fast wireless Internet connection only when it is stationary, but a new mobile version of WiMAX will be available this year, which is expected to be a breakthrough for the technology. Intel, Nokia, Samsung and Motorola all support the open-standard WiMAX as an alternative wireless broadband Internet connection alongside third generation mobile telephony networks, on which Internet access can get squeezed if networks fill up with voice callers.

Nokia‘s WiMAX base stations will be commercially available for broadband operators in the 2.5 gigahertz band at the end of 2007 and for 3.5 gigahertz in the first quarter of 2008.
Via Reuter