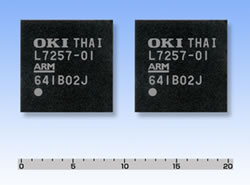 Oki Electric Industry Co Ltd. today unveiled the ML7257, its base band LSI for personal handy phone systems (PHS). This LSI is compliant with W-OAM the Advanced PHS communications standard that enables a communication speed of 204kbps, which is 1.6 times faster than the conventional speed of 128kbps. The LSI will be used in three PHS devices announced today from WILLCOM, Inc., the sole provider of PHS services in Japan. OKI’s ML7257 is a PHS base band LSI that incorporates voice and data communication functions in a single chip. OKI succeeded in including the three types of modulation and demodulation functions defined by W-OAM, as well as all the voice compression functions in a single device. Thus, power consumption is reduced to two-thirds that of conventional DSP-based software solutions. For the CPU core, the LSI uses ARM7TDMI, which is used in many mobile phones and PDAs around the world because of its high-performance, low power consumption and high-code efficiency. W-OAM ensures stable communication by automatically selecting the modulation method depending on the frequency status.

WILLCOM, Inc. is a leading mobile data telecommunications company, providing PHS services in Japan. In addition to data telecommunications, WILLCOM introduced the “WILLCOM Flat-Rate Plan” in May 2005, the Japanese mobile industry’s first fixed-rate voice communication service. WILLCOM has also introduced a series of other new services to the market, and currently has more than 3.5 million cumulative subscribers (as of November 2005).