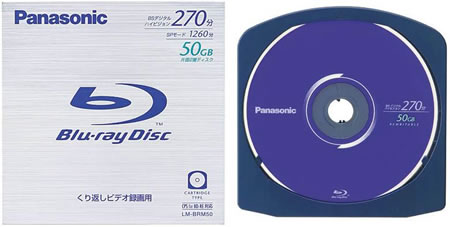 Panasonic has developed the world’s first Write-Once Blu-ray Discs (BD-R) with 6X writing speed. The new Panasonic 6X discs have a maximum data transfer speed of 216Mbps, which is 20% faster than that of 16X DVD-R discs. This transfer speed, along with the discs’ high capacity, allows consumers to use these discs for a variety of applications such as storing High Definition video or backing up PC data. The new discs have a wide power margin at any writing speeds from 1X to 6X. This enables high-quality recording, even if the drive’s laser power fluctuates, resulting in greater overall drive compatibility.

The new Panasonic discs will be available in Japan with both 25GB and 50GB capacities in July. Blu-ray disc drives compatible with 6X write-once Blu-ray discs are planned to be commercialized in Japan by the end of September 2008.