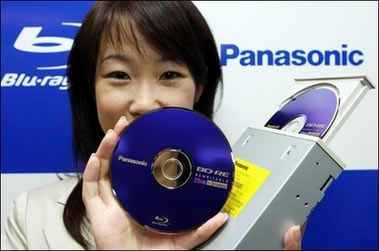 Panasonic will sell the first Blu-ray DVD player-recorder in Japan in November, a company official said, months after rival Toshiba released a comparable product in a feud for the next standard of DVDs. Previous Blu-ray machines, which are also marketed by Sony and South Korea’s Samsung, could only play commercially released DVDs or recorded material but not do both.The combination of recorder and player for the Blu-ray format is the first of this kind in the world and for Japanese consumers, the recording function is essential as the quality of TV screens in Japan is very high.

The Panasonic Blu-ray DVD player-recorder will cost approximately 300,000 yen (2,600 dollars) for the product of 500 GB HDD capacity and will be available from November 15th.
Via Yahoo News