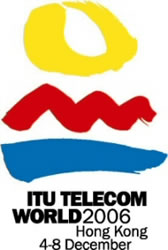 Panasonic Mobile Communications Co., Ltd announced that it has developed two prototypes of mobile phones equipped with wireless LAN (IEEE802.11b/g) module. Using wireless LAN module, the handset could be utilized as high quality IP TV phone or as player, server, and controller to enjoy rich digital contents wirelessly with DLNA compliant products at home. The first prototype handset could be used as in-house IP phone utilizing an internal wireless LAN network which enables the user to enjoy IP TV phone function with high quality voice and motion picture at up to 30fps (frames per second). Using the prototype handset with DLNA function as a player, the user could enjoy streaming of high quality movie contents from DLNA compliant server. If the handset is used as a server, the user could see still pictures taken by the mobile phone at DLNA compliant products such as TV or PC. Moreover, the user could operate DLNA compliant products to watch digital contents using the handset as a controller.

Panasonic will display the two prototypes of mobile phones equipped with wireless LAN at its booth at the ITU TELECOM WORLD 2006 to be held in Hong Kong, China from December 4 to 8.