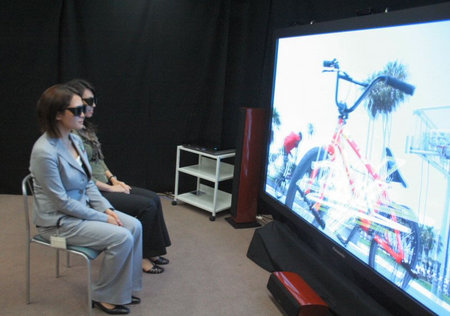 Panasonic has developed the world’s first 3D full HD Plasma Theater System, which enables the viewing of true-to-life 3D images by using a 103-inch plasma television and a Blu-ray Disc (BD) player, distributing full high-definition (HD) (1920 x 1080 pixels) images to left eye and right eye. Panasonic’s system comprises a 103-inch plasma television and a BD player that plays back BD onto which 3D images, consisting of left- and right-sided 1080p full HD images, are recorded. By wearing active shutter glasses that work in synchronization with the plasma television, the viewer is able to experience 3D images formed with twice the volume of information as regular full HD images, and enjoy them together with high quality surround sound. This system enables full HD signal processing on each of the left and right images in every process — recording, playback and display.

Panasonic will present this system at CEATEC JAPAN 2008, which is due to be held at Makuhari Messe from September 30 to October 4, 2008.