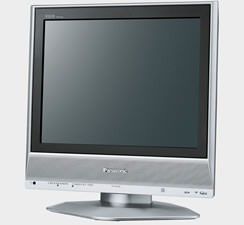 The Matsushita Electric Industrial Co Japan has launched for the first time 15” liquid crystal television VIERA “TH-15LD60 “with a built in digital tuner. The television program guide can be started quickly with the remote control. Digital photos can be viewed via the built in SD memory card slot. It’s built in speakers have an output of 6 watts. The TH-15LD60 has 640 x 480 resolution. Also included is an Ethernet port using which it can connect to the Internet via “T Nabi” service. It measures 367 × 215 × 389mm (width x depth x height), weighs 7.0 Kg.