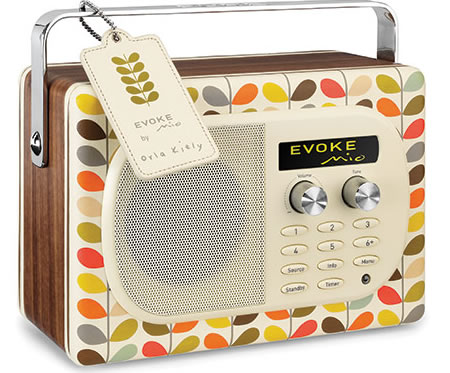 PURE EVOKE Mio by Orla Kiely is a custom designed luxurious digital and FM portable radio featuring Orla Kiely’s signature stem print. An internationally renowned fashion designer, Orla Kiely has applied her instinctive love of pattern; colour and texture to PURE’s iconic EVOKE Mio digital radio and dressed it with her signature stem print. Based on the multi award-winning and iconic EVOKE-1S, EVOKE Mio by Orla Kiely is packed with features including digital and FM radio and an input for an iPod/ MP3 player. Other features include an OLED (Organic LED) display with both manual and automatic brightness controls; textSCAN and Intellitext for pausing and controlling scrolling text and storing information for browsing at a later date; an alarm, kitchen timer and 30 presets.

EVOKE Mio by Orla Kiely will be on the shelf exclusively at John Lewis from early November and at independent retailers from March 2011. The EVOKE Mio by Orla Kiely ($240) is finished with a mirror chromed handbag style handle, walnut veneered cabinet, cream fascia and a stylish leather tag to complete the look.