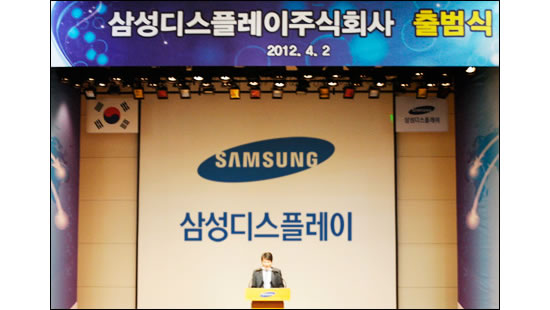 Samsung Display, a global leader in display panel technologies and products, announced today that it has been officially launched as a new corporation, spun off from Samsung Electronics. Samsung Display held its inauguration ceremony today and will begin business operations in earnest after carrying out incorporation registration on April 3.Donggun Park, executive vice president and head of the former Samsung Electronics’ LCD Business was elected CEO of Samsung Display. The company, which recorded 22.7 trillion KRW (approximately 20 billion U.S. dollars) in annual revenue in 2011 as Samsung Electronics’ LCD Business, became the world’s largest display manufacturer overnight, based on its 20,000 employees and five production facilities worldwide.

More than 350 employees attended the inauguration ceremony. At the inauguration, many reflected on the success of Samsung Electronics’ LCD Business over the past 21 years and expressed a widespread determination to once again become The No. 1 Global Display Manufacturer. Amid the flattening growth in conventional LCDs, Samsung is planning to massively increase its investment for OLEDs, regarded as the next-generation of flat screens. Samsung Display will deal the biggest blow to local rival LG Display and it’s expected the bottom line of Japan Display could also be squeezed as Samsung can boost product output in the shortest time.