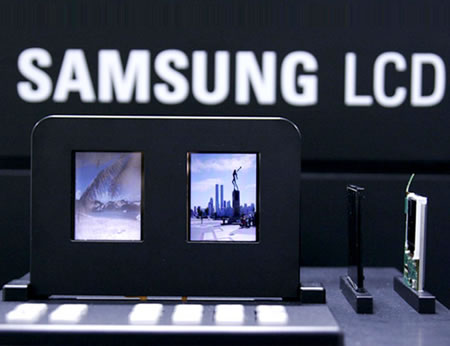 Samsung Electronics Co., Ltd. has created the first LCD panel that can produce independent images on each side of a mobile LCD display. Samsung’s new double-sided LCD can show two entirely different pictures or sets of visual data simultaneously on the front and back of the same screen. Other conventional double-sided LCDs can only show a reverse image of the same video data. This new development will replace two display panels with one; thereby reducing overall thickness of mobile products by at least 1mm.Samsung’s new double-sided LCD has two gates that operate each pixel instead of one, so the screen on the front can display different images than the one on the back. The double-sided display makes use of Samsung’s proprietary Amorphous Silicon Gate (ASG) technology, which accommodates the increased number of TFT gates without increasing the size of the driver integrated circuits. The new Samsung mobile display requires only one backlight, while competitive double-screen LCDs requires two.

The double-sided, dual image LCD’s efficient use of light to display images in both transmissive and reflective modes promotes slimmer, more cost-effective products. The new Samsung double-sided LCD is 2.6mm thick and 2.22″ wide, with QVGA (240 x 320 pixel) resolution, and has brightness values of 250 nits for the front and 100 nits for the rear display. It will be exhibited at the Consumer Electronics Show, which opens in Las Vegas on January 8.