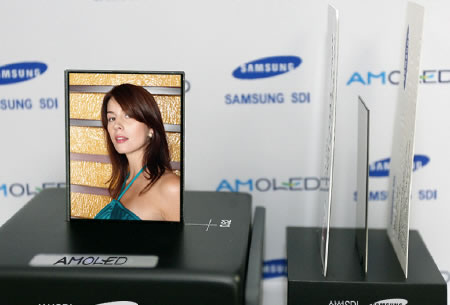 Samsung has developed the world’s thinnest 2.2-inch active-matrix organic light-emitting diode (AM-OLED) display which is only 0.53 millimeters thick, the thickness of a postcard. It is much lighter, brighter and more energy-efficient than current dominating LCD panels, the company said. Samsung plans to mass-produce the paper-thin panel within a few months and supply it to mobile phone and other portable gadget makers. Korea’s Reigncom and Japan’s Kyosera have already purchased considerable amounts and applied it to Clix MP3 players and Media Skin mobile phones, respectively. Samsung,s new organic screen is thinner than a credit card. The company hopes it to be used in high-end mobile phones and mini video players.

The yield in the OLED manufacturing process for the 2.2-inch display is still hovering around 40 percent, a company insider said, which means that only four out of 10 panels produced from the line are good enough to be sold and the rest are dumped. Such a low yield leads to a high retail price. A Samsung marketing official said that phones equipped with its AM-OLED panel is sold at around $200 more than phones with an LCD screen.The OLED uses organic compounds that emit red, green and blue lights in response to electric signals. Unlike LCD screens, OLED panels do not need an additional light source, or “backlight,” so they are slimmer and more energy-efficient, and capable of showing clearer, fast-responding images.