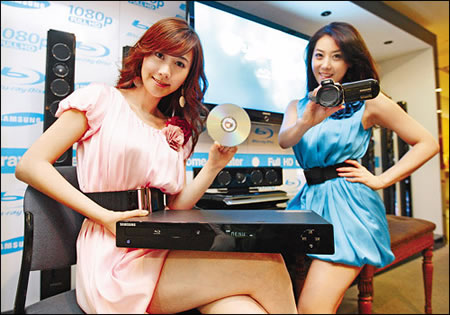 Samsung launched two new Blu-ray disc players — a fourth generation player-BD-P1500 and second-generation home theater -HT-BD2F. The next-generation Blu-ray disc format offers massive data storage capacity, high-definition video and audio quality, and is now the most likely successor to the DVD format.
The Samsung BD-P1500 player can play the original and full screen high-definition versions of CD, DVD, and Blu-ray discs, and sports various functions. The Bonus View function, for instance, provides information on actors and an actress appearing in a movie as it is played, and with the Bookmark function, a user can easily jump to the scene s/he likes.

Samsung decided to use a “5.1-channel” speaker set in its HT-BD2F Blu-ray home theater, scheduled to be launched in May. The 5.1 channel speaker set, comprised of one subwoofer and four surrounding speakers, is popularly used in home entertainment systems.