The Samsung SNS-400 and SNS-100 intelligent video network servers receives an analog image and encodes it as a clear distortion-free digital video image before transmitting the image at a speed of 120fps (SNS-400) in real-time. The SNS-400/100 selectively applies MPEG-4/JPEG compression and provides the optimum level of image quality according to the transmission bandwidth. In addition to these features, the SNS-400/100 also supports RS-232C/ 422/485 port connections for PTZ cameras and two-way audio products, and ensures the convenience of video remote control. The Samsung SNS-400/100 supports a 4-screen-split system for effective viewing of analog video images input from the camera. The built-in USB allows image storage and remote-controlled image retrieval, and supports up to 4 sensor inputs and 4 alarm outputs. When the alarm is activated, images are immediately transmitted to the email address of the manager, and the situation is notified via the FTP server, which maximizes the level of convenience for users. 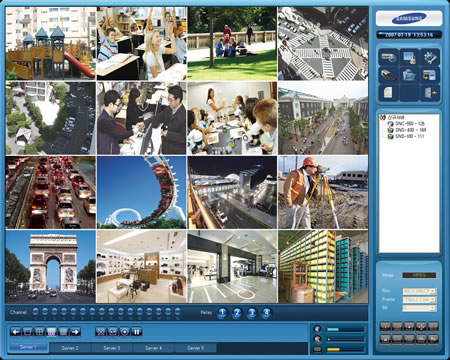 The Samsung SNS-400/100 boasts an excellent monitoring system, with its web viewer and 16 channel integrated management software, which are a special feature of the series. Using the built-in web server in the product, up to 20 users can simultaneously carry out real-time surveillance from anywhere and at any time. With its Network Manager integrated management software, all the network products of Samsung Techwin are based on Triplex technology storage, surveillance and play functions, as well as the remote control function, which results in an improved and more powerful performance than previous and existing products.