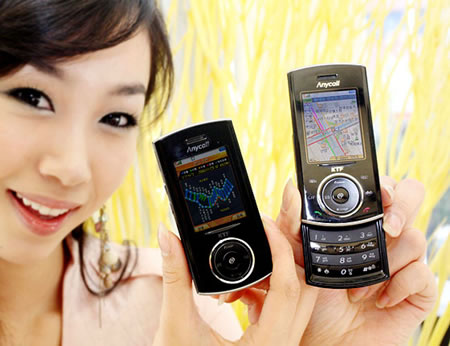 Samsung Electronics Co. Ltd announced the launch of a terrestrial Digital Media Broadcasting phone SPH-B5800 that supports Transport Protocol Experts Group (TPEG) feature. TPEG feature is a transportation information service based on terrestrial DMB data broadcasting. Samsung SPH-B5800 is the first mobile phone to support the TPEG service. The Samsung
SPH-B5800 provides users with traffic information updated every five minutes, as well as information about famous local restaurants and travel guides via terrestrial DMB channels. The B5800 supports a feature that allows users to view all channel lists while viewing DMB programs and thus, enables users to easily browse and find desired programs Moreover, unlike GPS in the past, there is no longer a need to access servers: Traffic information received via terrestrial broadcasting can be used to determine routes.The Samsung B5800 is exquisitely-styled with a thinness of 16.3 mm and it adopts a touch sensor that allows users to easily operate menus with the tip of their fingers.

In order to limit errors from pressing the wrong key, frequently used keys located in the center are buttons, while the menu keys located on the sides use a touch sensor. The B5800 also includes a 2 megapixel camera, a 330,000 word electronic dictionary, ‘My Pet’ function, file viewer, and audio book.The B8500 will be released in Korea this month and the price is around $600. A subscription to a telematics service is required to use the TPEG service.