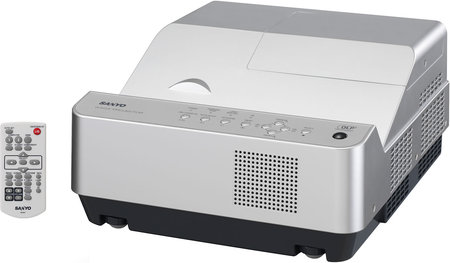 Sanyo today announced the release of a new ultra short-focus projector with 3D Ready. The new Sanyo model also offers the world’s shortest projection distance, and can be set up vertically or horizontally for enjoying large images projected from right on the wall. In 2007 Sanyo released the LP-XL50 projector with an ultra short-focus lens, which revolutionized the conventional projector concept with the world’s shortest set-up distance. The new Sanyo PDG-DWL2500J model, represents a further advancement of the LP-XL50 and have a compact design that is about half the size of the conventional model.

In the entertainment market, the new Sanyo LP-XL50 projector can be used in various new ways such as the projection of 3D games in an amusement arcade, or the display of a high-impact 3D dinosaur in a natural history museum. Sanyo will exhibit the projector at InfoComm 2010 in Las Vegas, USA, from June 9 to 11, 2010 and will launch in July 20.