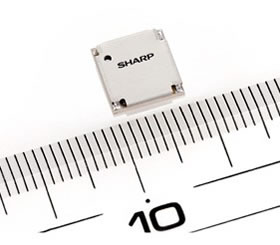 Sharp Corp. has jointly developed “DC2J1DZ120,” a wireless LAN transceiver module compliant with IEEE802.11b/g, with Nanoradio AB, a Swedish LSI manufacturer. The module is extremely small with dimensions of 8.0 x 7.6 x 1.3 mm. It also boasts low power consumption, namely 654, 165 and 0.3 mW in transmitting, receiving and standby modes, respectively. When compared to the previous product “DC2J1DZ115” the volume and the standby consumption power of the latest model has significantly reduced to approximately 1/2 and 1/3, respectively. The new model has two-chip configuration in which LSIs for power control circuit, baseband processing and MAC circuit are integrated in one chip while an RF circuit LSI and power amplifier in the other chip.

The SiGe process was used to manufacture the LSI that mounts the analog RF circuit and power amplifier. Sample shipment is slated for late September 2006 at a sample price of ¥20,000($170).Sharp plans to manufacture 100,000 units per month. The target applications are mobile phones, PDAs and others.