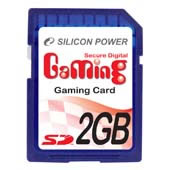 The single sided, exclusively designed, bearing the label “Silicon Power SD Gaming for the use of Wii and PS3”, is available now. With the growing passion and popularity for the two major game consoles, Silicon Power Inc foresees the SD gaming card to be the best choice for the next generation of the game consoles.