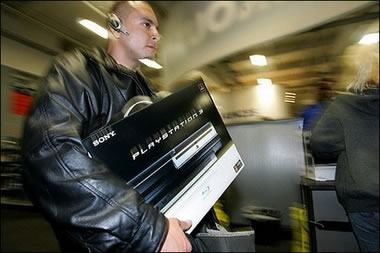 Tight supplies of Sony Corp PlayStation 3 game console led to rowdiness at several stores in USA when it went on sale Friday and tempted new owners to sell their consoles for a profit to those who hadn’t braved the throngs of sharp-elbowed shoppers. In Putnam, Conn., two gunmen tried to rob people lined up for the console, and shot one who refused to surrender his money. Michael Penkala, 21, of Webster, Mass., was wounded in the chest and shoulder. He was in stable condition Friday with injuries not believed to be life threatening, according to Connecticut State Police. In Fresno, Calif., police arrested two people and threatened to use Tasers to break up a crowd that rushed a store and trampled people in the parking.