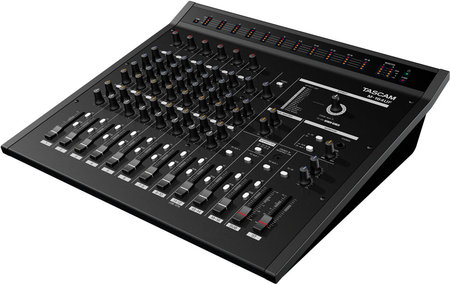 Tascam’s M-164 series is a new line of analog mixers, combining great analog specs with cutting-edge digital technology. The Tascam M-164 is a 16-channel mixer with 6 mic inputs, great-sounding EQ and a striking design with built-in meter bridge. The M-164FX adds digital effects like reverb, delay and chorus for polished mixes without adding external processing. The M-164UF is the first compact mixer with a built-in USB 2.0 to deliver all 16 outputs to a computer for live or studio recording.

The Tascam M-164FX adds a stereo effects processor with 16 programs of reverb, delay, chorus and other great-sounding effects. Step up to the M-164UF for a 16×2 audio interface that works over USB 2.0. The interface built into the M-164UF has the highest channel count of any mixer, allowing all 16 inputs to be recorded to their own track in your computer recording software.