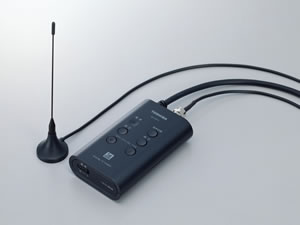 Now you can watch digital terrestrial television broadcast by connecting the portable Toshiba digital TV tuner SD-PDT1 to a Toshiba Portable DVD player. The tuner SD-PDT1 is compatible with the following Toshiba portable DVD players: SD-P1400, SD-P1600, SD-P1700, SD-P1800, SD-P1850, SD-P2700 and SD-P2800. The digital terrestrial TV broadcasts provide not only the high picture and sound quality of digital high definition (Hi-Vision) but also, for example, interactive programs, welfare programs that are kind to the elderly and disabled and the latest practical information for use in people’s daily lives. Operation of the tuner is possible via remote control (provided) also. The tuner doesn’t work with analog transmission. The tuner can be powered either the AC adapter or by the car adaptor of the DVD player.

The Toshiba tuner unit SD-PDT1 measure 100×60×23mm weighs 130g and will be available from July14th for approximately 14,800yen ($127). As digital terrestrial broadcasts are received by UHF antenna, the reception of sound and images is clear even on moving trains and buses etc.
Via – Toshiba Japan