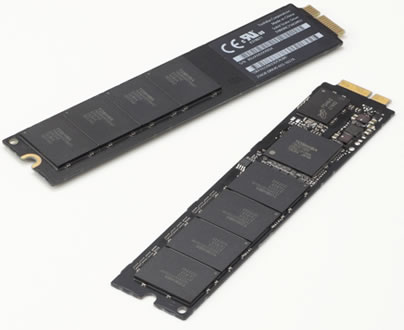 Toshiba today announced high performance blade-type SSDs -the Blade X-gale series in 64-GB, 128GB and 256GB capacities. The high performance blade-type SSDs are ideally suited for integration into space-sensitive products, including mini-mobile and netbook PCs, and give product developers greater freedom and flexibility in product design. The new drives are now available. As mobile devices gets smaller and lighter, yet even more feature packed than ever, the SSDs inside them – the heart of storing all the music and other entertainment data – must be even smaller, and much thinner.

The blade-shaped drive is only 2.2mm thick, 42% thinner than that of a typical mSATA form factor, and Toshiba’s advanced wiring technology has assured optimized wiring layouts and data transfer rates in this new form factor. Thanks to Toshiba’s base design technology that minimizes board warpage during thinning, it realizes 256GB capacity when mounted on both sides, the largest density in the industry for small type modules.