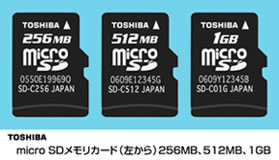 Toshiba Corporation today announced that the company will launch new microSD Memory Cards in July and August, and follow up in September with the introduction of SDHC Memory Cards for the global market. The microSD Memory Card is the world’s smallest memory card, just a quarter of the size of the miniSD card. It nonetheless provides the high capacities needed to support the must-have high-resolution cameras and digital music players that are increasingly integrated into mobile phones, while also supporting continued product miniaturization. The microSD Memory Card fully complies with the SD Memory Card standard, and can be slipped into an adapter for use in products with slots for standard SD cards. Toshiba will meet growing demand for memory cards in this small format with 256 MB, 512MB and 1GB capacity microSD Memory Cards. Card Ver2.00 for cards with a capacity of over 2GB, and will boost memory capacity to 32GB in the near future. 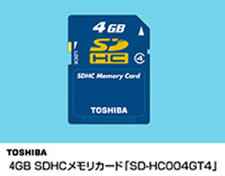 The SDHC Memory Card brings SD card to new level of performance in terms of capacity. SDHC meets the new SD Memory. It also complies with Class 4 of SD Speed Class, a newly defined standard for data processing speed, and it supports maximum write speed of 6MB per second. As a result, SDHC Memory Cards are optimized for high capacity and for such application as digital video and continuous shooting mode for high-end digital still cameras. Toshiba will bring a 4GB SDHC Memory Card to the world market.