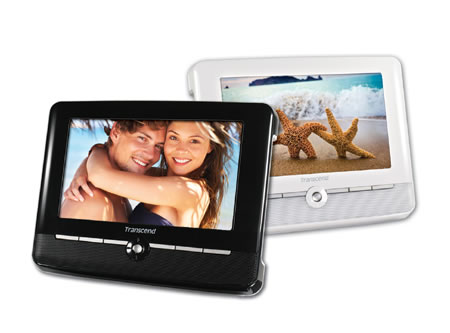 Transcend recently announced its successful line of T.photo digital photo frame – the T.photo720. Featuring a refreshingly modern design with a crisp new high-resolution (800×480) 7-inch widescreen TFT panel and 2GB of internal memory, the T.photo 720 is the perfect place to showcase all your favorite photos in astonishing clarity and detail. The Transcend T.photo 720 supports the most popular digital camera JPG and BMP formats, and users can choose to view photos one at a time, in slideshow view, or in a convenient tiled thumbnail view. Another advanced new feature of the T.photo 720 is its AOS (Automatic Orientation Sensor), which detects when the T.photo is rotated horizontally or vertically, and automatically adjusts image placement on the screen for optimal viewing.

Transcend T.photo 720 is fully equipped to play back movies and videos, with support for AVI, MOV, MPG, MP4, 3GP and Motion JPEG video formats. Besides playing movies and video clips, the T.photo also functions as a full-featured MP3 player and an FM radio with up to 20 station presets. The Transcend T.photo 720 comes with a special new MobileCard slot for direct input of microSD and M2 cards, which makes it easier than ever to view cell phone pictures or video clips. Transcend’s T.photo 720 digital photo frame is now available in either black or white versions, both with two full gigabytes of internal flash memory.