AKB48 singer Tomomi Itano, wearing a sexy animal print costume, walks with a lion in a commercial for Emobile’s Pocket Wi-Fi device that connects to the 3G network automatically and works as a Wi-Fi access point and router. In the commercial, Itano says that Emobile’s Pocket Wi-Fi is the king of Wi-Fi, in a reference to the lion being the king of the beasts. AKB48 is a Japanese female idol group produced by Yasushi Akimoto.The group has achieved enormous popularity in Japan. Its eleven latest consecutive singles topped the Oricon Weekly Singles Chart. The band has sold over ten million records.With 11,787,000 CD single sales according to Oricon, AKB48 holds the record for most singles sold in Japan by a girl group. 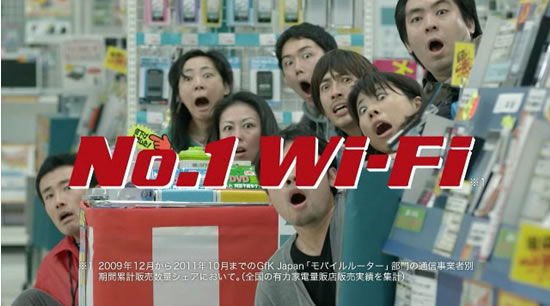 AKB48 is named after Akihabara (Akiba for short), the area in Tokyo where, on the 8th floor of a Don Quijote store, the band’s own theater is located. AKB48 still performs at the theater every day,[8] although, due to great demand, tickets are now distributed only via a lottery. AKB48 holds the Guinness World Record for being the world’s largest pop group.