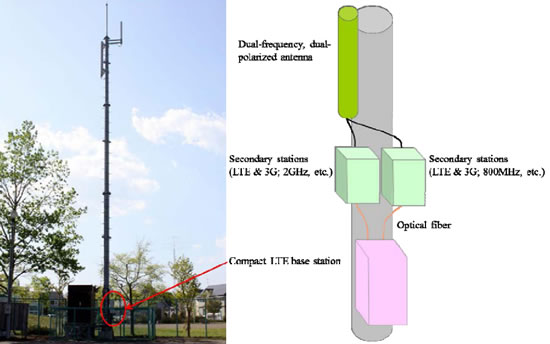 NTT DoCoMo announced today that its new compact LTE base station with simultaneous 3G capability, measuring less than 1/10th the size and less than 1/5th the weight of conventional LTE base stations, entered commercial operation in DoCoMo ‘s XiTM LTE and FOMATM 3G networks in Japan this month. The compact all-weather base station, which is mainly designed for area expansion in low-traffic areas such as mountainous locations, can be installed in places where conventional LTE base stations cannot be deployed due to excess size or cost. The increased installation flexibility will enable DoCoMo to accelerate wider LTE service coverage and improve LTE service quality.

The new base station, equivalent to the master station of a remote-type base station, can handle up to two secondary stations. Furthermore, thanks to the new base station’s 3G W-CDMA capability, simultaneous LTE and 3G service areas can be tailored efficiently to traffic and installation conditions by using secondary stations and multiple frequency bands. Electricity consumption is less than 1/4th that of conventional LTE base stations, realizing more eco-friendly operation. DoCoMo plans to double its existing deployment of 24,400 LTE base stations to 50,000 by the end of March 2014, promising both wider and higher-quality LTE coverage throughout Japan.